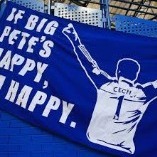 We get it, advertisements are annoying!
Talk Chelsea relies on revenue to pay for hosting and upgrades. While we try to keep adverts as unobtrusive as possible, we need to run ad's to make sure we can stay online because over the years costs have become very high.

Could you please allow adverts on this domain and help us by switching it off.