A Case Against Signing Radamel Falcao 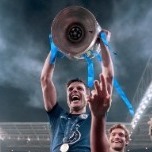